HomeAnimals16 Types of Owls Around the World 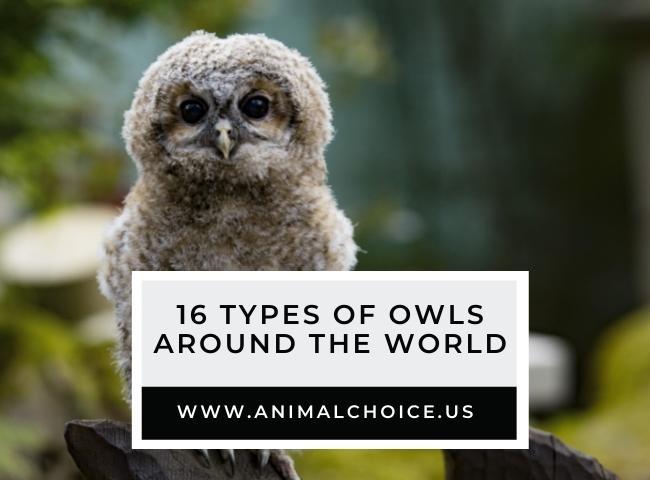 Another mesmerizing bird is the owl. These birds are considered birds of fortune and have been associated with spooky and mysterious events. The owl can be found in almost every part of the world, except Antarctica. Some of their striking characteristics make them stand out from other birds. They are extremely tuned in their senses and can turn their heads almost around their neck. They have eye tubes that go deep into their eyes, which are not like the spherical balls of us. Owls are blessed with farsightedness. They can see their prey up to 100 yards away. There are more than 200 species of owls known, and at least 18 barn owl species. We will be discussing the different types of owls and their unique characteristics.

The Great Horned Owl, also known as the Tiger Owl and the cat owl, is one of the most popular types of owls. It is an American native. This is the typical owl you’ve seen in picture books – it has scary yellow eyes and long feather tufts that look like a tuft of hair. It also has a deep hoot. The owl is one of the most adaptable birds in nature. It can be found in many habitats including deserts, forests and grasslands as well as cities and backyards. It’s not unusual to find it in any habitat other than the Arctic or the tropics. These owls can hunt rats, scorpions and even cats. They are powerful predators that have deadly talons.

The Barn Owl is both the most common and most widely distributed owl species. They are shy birds that avoid contact with humans. They build their nests in abandoned places such as barns, churches steeples, and wells. They are able to see at night and even detect sounds. Their faces resemble a white heart and they are medium-sized owls. They are known to have white chests and cinnamon feathers. They fly in a distinctive style and hunt on grasslands and marshes. Barn owls are loud and screech, but they have never been known to hoot like other owls.

The Arctic and tundra are home to the Snowy Owl, or Polar Owl. They are white, fluffy birds that are completely covered in feathers. This includes their legs and beak. They do this to stay warm in the Arctic. They eat a variety prey including small rodents and lemmings as well as Arctic hares and ducks. Their wings can spread up to 5 feet. Snowy Owls, unlike most owls, are diurnal. They can hunt in the Arctic summers during the day. This is one of the most beautiful species of owls.

The long-eared owl is a common species in North America. They are medium-sized and brownish-grey. Their orange feathery faces have long ear-tufts and a large, round facial disk. Their bodies have brown and white marks that blend in with the environment they live in. These owls nest in trees and roost during the day. They are also nocturnal hunters. Their distinctive deep hoot is a hallmark. The male Long-eared Owl’s loud hoot can sometimes reach 1 km.

The Spectacled Owl’s name comes from its contrasting’spectacles,’ or feathers that are white with white streaks between the eyes and its cheeks. These large owls can be found in forests throughout the Americas, including Brazil, Paraguay, Brazil, Paraguay, Central America, Paraguay, Paraguay, Argentina, Mexico, Trinidad and Central America. They hide under the leaves of trees to make predators difficult to spot. They are often preyed upon by larger birds, but they are usually solitary birds.

The Screech Owl is a typical owl, and there are currently 23 species of them on the planet. The Eastern Screech-Owl, a small and stocky bird with a large neck and a long head, is very similar to the other species. They are found in south-central Texas and northern Mexico. Their tail is short and their wings are rounded. The tufts of their pointed ears are mostly grey or reddish-brown. These birds can be easily identified by their whinny or trilling song.

The Western Screech Owl is another variety of these owls, and it mostly lives in Western North America. This is a small, nocturnal Owl that has yellow eyes and short ear-tufts. These nocturnal birds can glide and fly quietly with soft wing beats. Although they are quite quiet, these owls can be very aggressive when protecting their nests or attacking humans.

These owls are some of the largest owls in the world. They can be found in Europe, Asia, and North Africa. This is one of the most beautiful owls, with its striking orange eyes and feathery-tufted ear tufts. They are powerful hunters because of their sharp eyes and strong feet. They are agile and can fly quickly, glide in the air and soar high in the sky like hawks and eagles. They are silent hunters and can only be heard when their wings flap.

Remember Errol, an old owl from Harry Potter who served the Weasleys? It was a Great Gray Owl. These owls are the province emblem for Manitoba, Canada. They are the largest species in the world. It is the most prominent owl with the largest facial disc and no eartufts. This owl has the longest tail, a grey-colored face and yellow eyes. These owls are skilled hunters and can capture their prey up to 2 feet below the snow. They are also known as the Phantom of the North, or ‘bearded Owl’ due to their white moustache.

The Northern Pygmy Owl is a small owl of 18 cm length. They can be found mostly in wooded canyons and open forests. This tiny owl is a fierce hunter and is active during the day. These birds are usually solitary and only hunt small birds. These birds are able to fly quickly and low between trees and can then perch on higher branches. Northern Pygmy Owls can be quite aggressive and will attack animals larger than themselves.

The Burrowing Owl, a small, sand-coloured bird with bright yellow eyes and long legs, is small in size. They can be found in North and South America, in open areas such as deserts, grasslands, deserts and other dry areas. Prairie dogs dig burrows for them. Burrowing Owls have excellent hearing and vision for capturing prey. They mainly hunt rodents and insects.

The Oriental Bay Owl, scientifically called Phodilus badius, is part of the Tytonidae family of barn owls. They can be found in Northeast India, Myanmar and Thailand. They love the foothill, deciduous and mangrove forests where they can thrive. The Bay owl is also known for its love of large insects, small mammals and birds. It is a small, nocturnal bird with a short neck that can grow to 22-30 cm in length. It has short wings and a short tail.

Tawny Owl, a type of nocturnal owl, is intelligent and has many superstitions. They are scientifically called Strix Alcoa. It was known to have eaten small mammals like Wood Mice and Bank Voles. They can also be seen eating small animals such as moles, birds, earthworms and frogs. It thrives in urban parks and wooded suburban gardens. It used to build nests in many places, but now prefers tree cavities.

The Northern Saw-whet Owl, a short-bodied owl with a round head and no ear tufts, is small. They have a light brown appearance with white streaks and dark brown eyes. The large, yellow-colored owl is found on the birds. White eyebrows connect with their beaks in a ‘Y. They can be found in the south of Alaska, from Nova Scotia to southern Alaska, as well as in the northern United States and farther south in mountains. They have been seen eating small birds and large insects, as well as deer mice, young squirrels and voles. This is the most beautiful type of owl in the world.

The medium-sized Striped Owl has large ear tufts and is an owl species. The appearance of the Striped Owl is brownish-white with a dark beak and colored eyes. The owl’s upper half is covered in black vermiculation and has heavy stripes. The species can grow to 30-38 cm in length and weighs between 320-546 grams. In the wild, the species lives for 10-20 years.

Tawny fish-owl is one type of owl that belongs to the Strigidae family. This species is found from southern Nepal to Bangladesh, Vietnam, and China. Brian Houghton Hodgson, who first described the owl species in 1836, described a yellow-footed fish bird from Nepal. It has wide, yellow eyes and drooping ears. It is unique because of its brown plumage and black mottling.

Spotted Wood-Owl, a medium-sized owl species, has a round head and no ears-tufts. It also has dark eyes. The male species can reach 44-48cm in length and weighs around 1011g. They can be vocal and active at night. You can see the owl species eating small birds, large insects, rats and mice. It can be found in South Burma, Thailand and Cambodia, as well as the Malay Peninsula and Central Sumatra.

These are just a few of the many interesting types of owls that can be found around the globe. Since ancient times, owls have been associated with good fortune. They are associated with evil, death and other superstitions. They are intelligent and possess unique characteristics that aren’t found in other birds. These are the types of owls. Please share this information and leave your comments.

Next article
Beautiful Black and White Animals in the World