HomeAnimals10 types of spiders in the world 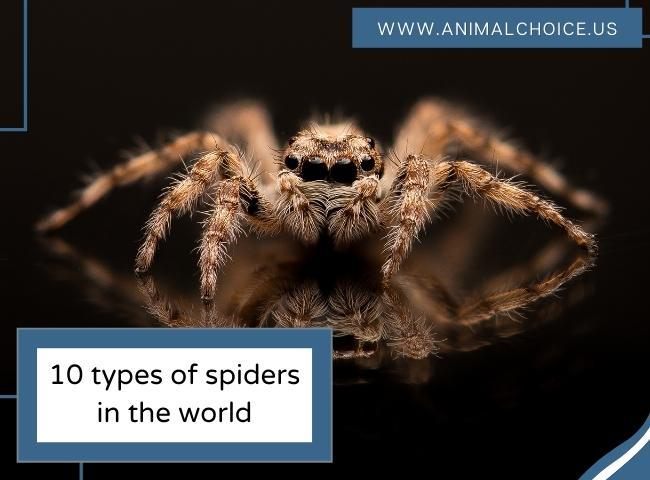 Spiders are an arthropod species, meaning they have eight legs and chelicerae that inject venom. There are many spider species and they can be found all over the world. There are currently 45,000 species of spiders known and they can be found all over the world, except Antarctica. Most spiders live between 1 and 3 years. However, some can live up to 30 years. The Patu spider can grow to 0.37 millimetres (0.014 inches). The Goliath Bird Eating Tarantula is the largest spider in the world, with a body length of 11.9 cm (4.7 inches) and a legspan of 28 cm (11in). Let me give you a list of some of the most commonly found spiders around the globe.

Lycosidae are family members that include the Wolf Spider. They are known for being agile hunters and have excellent eyesight. They are not able to spin webs and resemble nursery web spiders. The spider can grow to around 1-30 mm (0.04 – 1.18 inches), and has large, obvious eyes. Their unique eyesight makes them easily identifiable. They can also be identified by the way their eyes reflect light. There are eight eyes in total, but only two of them are prominent and large. It can inject venom. The most common symptoms include itching, swelling, mild pain, and slight discomfort. They are territorial and can thrive in all kinds of terrain, from forests to scrub.

Jumping Spiders make up the largest group of spiders and are home to more than 6,200 species. Although they prefer tropical forests, they can be found in many other locations around the globe. Salticidae is the family that includes all spider species. They come in many colors, shapes and sizes. You can see jumping spiders all over the world, with the exception of at the North and South poles. These tiny spiders can leap up to 50 times the length of their bodies. This is why they are called Jumping Spiders. They don’t use webs to hunt and can jump easily to catch their prey.

Ground spiders are small, delicate types of spiders. They can grow to a maximum of one-half inch in length. Although it can come in many colors, most ground spiders are brown and have bright orange or red markings. They hunt spiders and don’t build webs, but rather chase down prey. Most ground spiders hunt at night, but some can be active throughout the day. They can be found crawling along baseboards, under stones and logs, and in leaf litter. It is part of the gnaphosidae spider family.

The genus Cheiracanthium, also known as Sac Spiders, is a genus of araneomorph Spiders within the family Cheiracanthiidae. Carl Ludwig Koch first described it in 1839. It is mostly pale in colour, with the abdomen ranging from yellow to beige. Male and female sizes range from 5-10 millimetres (0.20 – 0.39 in). The spider can grow to a quarter of an inch in height and is most commonly found in the east, specifically in New England and the Midwest. This spider is an outdoor one and prefers to nest inside buildings and homes. Yellow Sac Spiders are night-time hunters that feed on small insects, and sometimes other spiders.

Crab Spiders belong to a group of spiders that includes over 2100 species and 175 genera. The family Thomisidae also includes flower spiders and flower crab spiders. They were able to survive in meadows and woodlands, tropical rainforests as well as grasslands, marshes, scrublands, and gardens. The length of the female can range from 0.16 inches to 0.3 inches. Males tend to be larger than their female counterparts. The appearance of females is white, yellow, or pale green with two pairs red dots visible on the abdomen. Males are darker in colour and have a greenish-white abdomen with brown stripes. The species’ avarage life span is dependent on its species.

Brown Recluse Spiders, also known as the violin spider, brown fiddler or fiddleback spider are shy and non-aggressive. They can be found outdoors in the U.S. Midwest. They thrive in the same environment as humans. Although they are venomous, the bite does not cause large necrotic or fatal injuries to the surrounding tissues. To capture prey, it used to make small, irregular webs. It also used to hide in darkness and move about at night looking for prey. You can control it with insecticides applied to non-carpeted surfaces.

American House Spiders can be found all over the globe, not just in the United States. The common house spider is also known as the common spider. It thrives in houses, garages and sheds, as well furniture. The spider species aren’t dangerous and the worst bites can feel like a bee sting. Although they do contain venom, the spiders rarely inject it into humans. They have dark markings on their abdomens, while females have yellow legs. Males have orange legs. Both have dark bands along the legs.

Tarantulas belong to the Theraphosidae family. There are more than 900 species that can move their jaws up or down. Eight tiny eyes are used to detect movement and hairs on the body. They also have a very sensitive to vibrations. Tarantula spider species uses a spin net to bite its prey. Their fangs are long and curved, which can render them helpless. Tarantulas are strong defense system and can support their heads with the help of their legs. They will display their curving fangs in a frightening display.

Camel Spiders are a type of spider or animal that starts with the letter C. They have ten legs, of which two are actually pedipalps. Sensors are used to find prey. Solifuges is a taxon that includes these spiders. They can run at speeds of up to 10 mph and can grow to 6 inches in length. Their jaws can take up almost a third of their body. They are also called sun scorpions and wind scorpions, as well as Kalahari Ferraris. They love to eat insects, lizards and snakes. You can see Camel Spiders all over the globe.

Hobo Spiders, also known as funnel web spiders, are a type of spider that is most commonly found in North America. Females can grow to 11-15 millimetres, while males can grow to 8-11 millimetres. These spiders would use silk sheets to create a funnel-shaped structure and wait for prey insects to crawl onto their webs. These spiders have a brown colour. Male spiders look different from females because they have a swollen abdomen. It prefers to be alone, except when it wants to mate. It was able to weave webs around any object that was close to the ground in both dry and warm environments.